Eddie Griffin is in the middle of a seriously nasty lawsuit — one littered with allegations of deception, fraud and worst of all … bouncing one of those comically oversized donation checks. 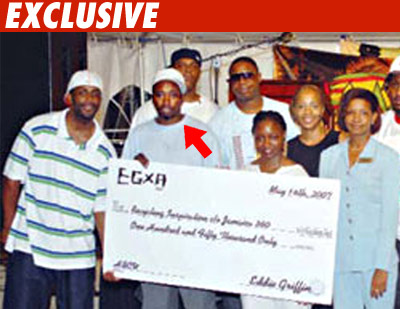 It’s all over a $150,000 gift Griffin presented to the “Jamaica 360” program — which sends 100 African American college grads on a career building vacation to Jamaica. Sure the intentions were good — but according to a lawsuit filed by a man who went on the trip, the check bounced.

The man, Samir Sayegh, claims he was then duped into lending Griffin his credit card to cover a hotel bill while they were in Jamaica — but according to the suit, Griffin took the card and secretly made a $150,000 charge to the main developer of J-360. Two weeks later, Samir got a bill from American Express with the six-figure charge.

So now … AmEx is suing Samir for the $150,000 charge … and Samir is suing Eddie and all the event developers to make them foot the bill. Good times.

Griffin’s lawyer just told us “Eddie is denying all allegations.”