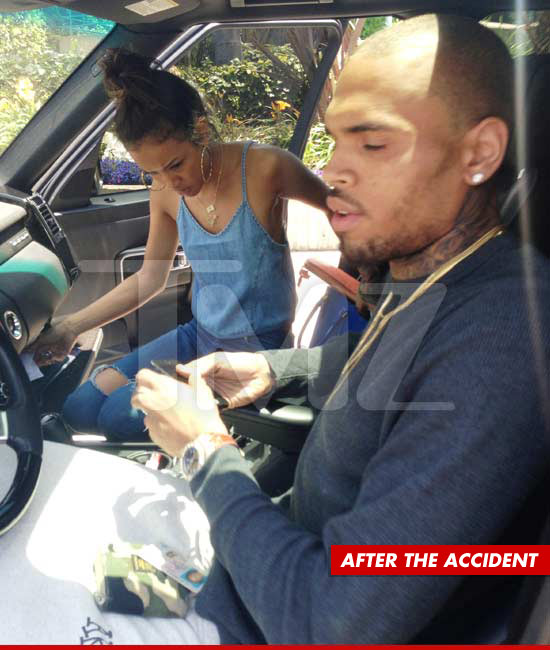 8:10 AM PT  Chris’ lawyer, Mark Geragos, just told TMZ, the criminal hit-and-run charge against his client is “B.S.”  Geragos says Chris gave the other driver his Virginia driver’s license and also gave her an insurance card.

Geragos says Chris has 2 cars, and the Fireman’s Insurance card he forked over was for his Lamborghini — not the Range Rover he was driving. Geragos acknowledges Chris didn’t have a California DL, but says it’s ridiculous to charge him with hit-and-run given that he turned over sufficient identifying info.

Chris Brown went insane on the woman whose car he hit last month, screaming at her, “Who do you think you are, Bitch?” … and it got so bad, Karrueche Tran yelled to Chris, “Don’t touch her, don’t touch her!”

In a written statement to cops — obtained by TMZ — the victim, Olga Gure-Kovalenko says after Chris rear-ended her Mercedes, they pulled to the side of the road, got out and they both took pictures of the vehicles.

Things went South quickly when Olga asked for Chris’ driver’s license, registration and insurance info.  Karrueche handed over HER DL, and Olga wisely said she needed to see Chris’ DL.   Karrueche said she was the owner of the vehicle so Chris didn’t need to supply any info.  Olga says she persisted and asked for Chris’ info.

Olga says, “The guy [Chris] tried to grab camera or me.  I jumped back, the girl [Karrueche] screamed, ‘Don’t touch her, don’t touch her!'”

Olga says Chris then started to rant, “You are a bitch!  Who do you think you are, bitch?  Do you think if you driving Mercedes so got money, bitch?”

And then Olga says Chris dropped this, “Do you think I am just a black n***er.”

Olga says Chris continued screaming and then “slammed a door and drove away fast and noisy.”

Olga says Chris also “bragged about how much money he has and offered up false registration.”

Olga’s lawyer, Freddy Sayegh says his client didn’t know the driver was Chris Brown at the time of the accident.